Santa Lucia station is the last stop on the line from anywhere to Venice…but only because if you kept going you’d end up in the lagoon from which the city rises. Lucky for you, as you continue on foot, there are many bridges for you to keep your feet dry, but none so globally iconic as the 17th century white limestone bridge connecting the New Prison to the Doge’s Palace on the far side of the city.

Nicknamed the “Bridge of Sighs”, the legend says that the name is inspired from the Italian, “Ponte dei sospiri” given by Lord Byron in the 19th century after a romantic notion that convicts would walk across this bridge from their trials in the palace to their sentence in the prison. As they passed over the canal, the stone-bar windows would afford them the last view they would ever see, which was a magnificent view of the City of Venice, inspiring them to “sigh” heavily with regret for their future view as they trudged their way to their cells. OK, maybe we’re being a little over-dramatic here, as the bridge was built long after the inquisitions and trials by ordeal. Nonetheless, Byron isn’t completely wrong….The bridge is exceptionally beautiful and famous all over the world, and while it may not be true from the inside, there is no shortage of romantic sounds emanating from the tourists would flock to see it. 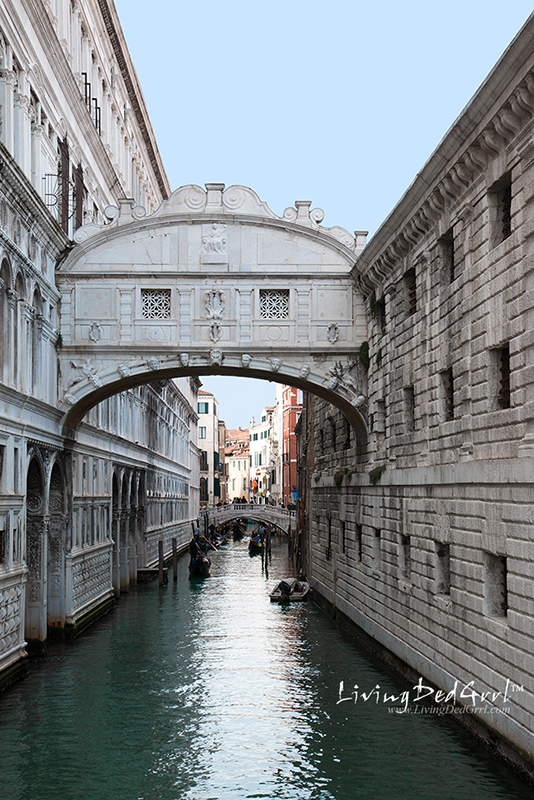 Truthfully, there isn’t much of a view of the city from inside the bridge. You can access the bridge itself and personally trudge from palace to prison if you like, but you can only do so by purchasing a tour of the Palazzo (fancy Italy talk for “Palace”) and the Prison. The bridge is not accessible from the outside, and there are no free corridors. Once inside, however, you will find that the tiny, thick windows aren’t quite large enough to inspire much of a view of anything. On the north side is a commanding view of….more white limestone….as the buildings are tall and the canals narrow, and all that is visible is canal water and the shadowed blocks of the nearby buildings. To the south, however, if you trudge at just the right time, you may catch a limited but still inspiring glimpse of  the Church of San Giorgio Maggiore at sunset, and perhaps you will see what Lord Byron saw and respond accordingly. This is the extent of the view of Venice from the bridge, but if this is your sole interest and you’re not inclined to tour the rest of the building, there are three other methods for bridge-viewing.

The Bridge of Sighs is one of the most famous and easily recognizable bridges in the world, so if you want to find it from the outside, follow the crowd. On the outside, the only vantage points to see it from are the Ponte della Paglia on the south side (which is where the largest crowds gather) or the Canonica Bridge on the north side. You cannot see the bridge from the windows of the Palazzo or the Prison. This, however, is only two ways to view this structure, and I did promise three, didn’t I…. 😉 The third method of viewing is perhaps the most “touristy” and exceptionally romantic (*sigh*), and that is to hire a gondola, which will take you on a ride through the canals of Venice and pass beneath this bridge. Gondola rides are not just for lovers and can be purchased by groups, families, or couples. However, if you happen to be a loving couple, you’re in luck! A second legend has it that lovers who kiss on a gondola beneath the Bridge of Sighs at sunset while the bells of St Mark’s Campanile toll will have a love that lasts forever……..Awwwwwwww. 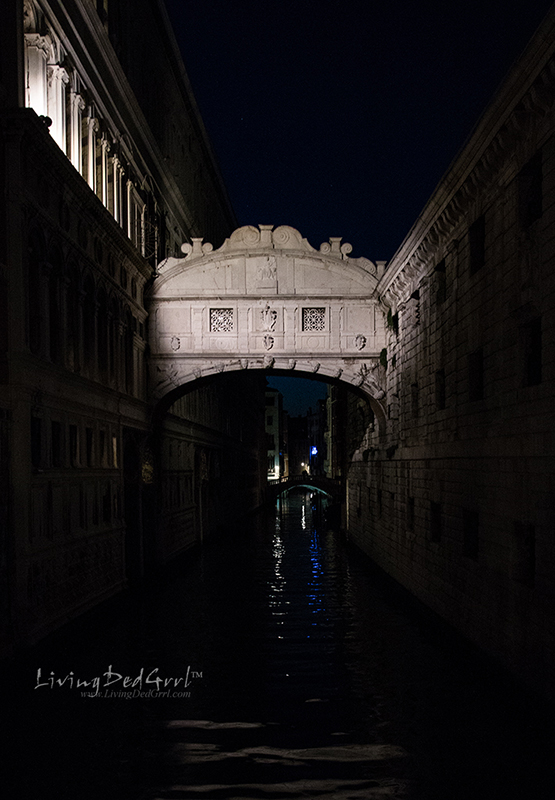 A view from an evening water taxi

Quick Trip Tip:  If you’re looking to photograph this bridge, there is no real time of day where the lighting is particularly good. The buildings are very tall, and the canals are narrow. The bridge faces north and south and is positioned on the inside of a small canal, so it is always in shadow. However, some shadows are better than others. Sunset and Sunrise should be avoided as the height of the buildings will prevent any western sunset view and cause deep shadows, unless there is significant cloud cover and color directly over the bridge. Shortly before and after Noon, when the sun is higher in the sky may provide enough light, however, the shadow of the angles of the buildings often fall across the bridge and the white of the sun on the limestone may overexpose the details of the artwork. A speedlight may be necessary to dispel shadows.